It rained all night, but the skies cleared up by morning. This was the view of Haeundae Beach from our hotel room in Busan.

We started the morning out with breakfast at Dunkin Donuts. Joni tried bubble tea for the first time.

Then she took her first subway ride! 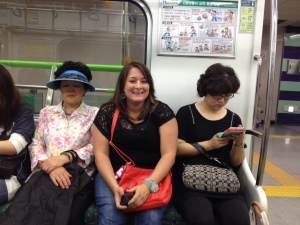 We took the subway to a stop called Suwon, then walked through the outdoor street market. Joni wasn’t too impressed and the smells of the oriental spices made her sick to her stomach. We continued walking and came across a museum. Joni’s short legs had a difficult time on the big steps. 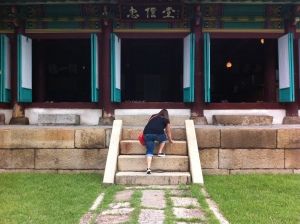 Next, I took Joni to my favorite place in Busan. (Fun fact: Dave’s Australian computer thinks I spelled favorite wrong… I went over the spelling so many times in my head before I figured out what was wrong) 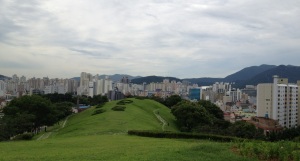 After the fun at Dongnae Eupsong Fortress, we went to PNU for some Korean BBQ. Joni didn’t like it, but she gets a little weirded out by meat sometimes. I love Korean BBQ and I am sad because I have no one to eat it with.

After lunch we went to another norebang (Korean singing room). This one gives you a score based on your performance. OF COURSE I was the first one to get a 100! 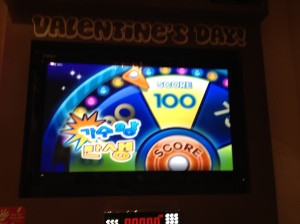 By the time we got to the singing room, Joni was starting to feel pretty awful. I think it was a combination of the heat and jet lag. We cooled down there and then headed back to the hotel. We stopped for some “Blue Lemonade Vodca” first. Yum!