We went to the mask festival in Andong on Saturday and had a really great time. The festival has a few different sites and it was tough to pick just one. We chose to go to the smaller festival at the Hahoe Folk Village. It’s a village full of Korean traditional homes, called hanok. It’s also a UNESCO World Heritage Site.

Before entering the park, we were greeted by a large group of students that were so excited to practice their English with us. 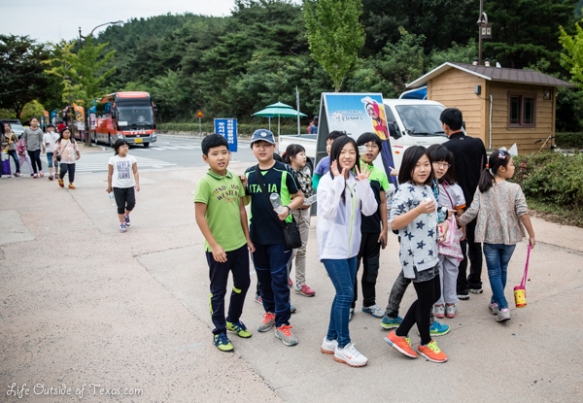 After buying tickets, we stopped off at the information booth to pick up some information about the festival. The woman spoke really great English and she marked on our map where the festival would take place. It was a 1km walk to the festival site, but we opted to take the free shuttle. 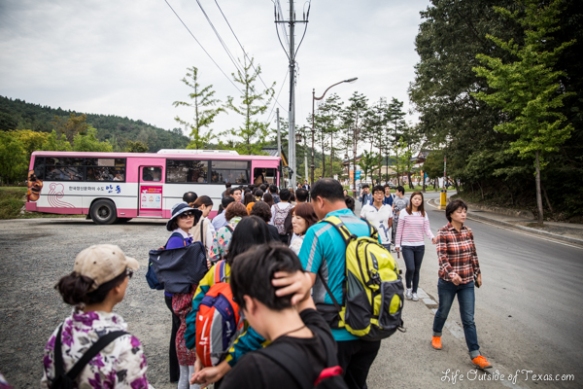 The first thing we noticed after being dropped off by the shuttle was the dried up lotus flowers. This would have been absolutely gorgeous in July!

We decided to take the path by the river, rather than going into the village right away. It’s a really lovely walk.

On the way to the mask dance stage we passed by a recreational area with games and huge swings. It looked like lots of fun! 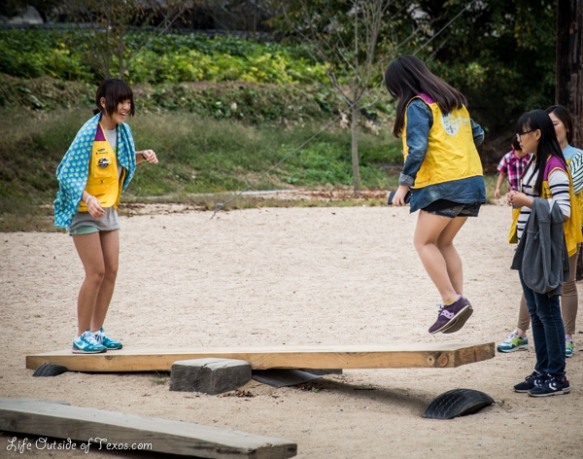 We got to the stage just in time for the 2:00pm mask dance. There was a big crowd already waiting for the show to start.

We had to sit on the ground so it was difficult to take photos over the heads of those in front of us. The performance was interesting, but it was all in Korean so you couldn’t tell exactly what was going on. The part we understood best was when a bull came on stage and started peeing on the audience. 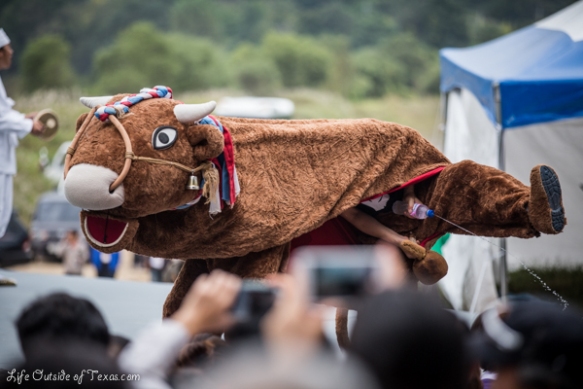 Then the masked man came out with a knife and a large hammer.

It was bad news for the bull. He masked man killed him with the hammer and then cut out his heart….

The show ran for a full hour and featured several interesting characters. 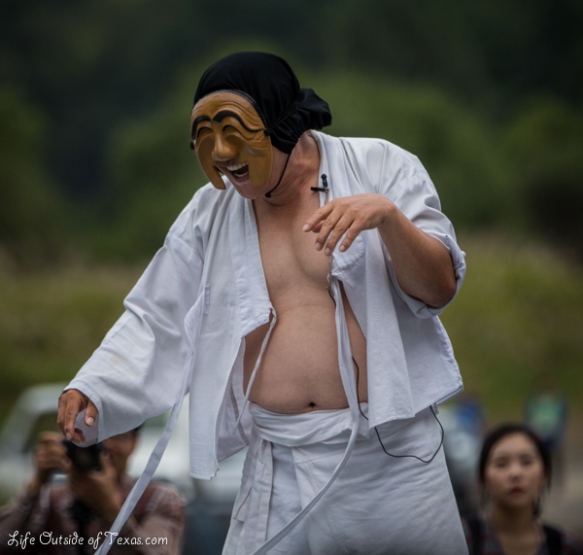 There was a taekwondo show immediately after the mask dance show. These kids were pretty impressive!

After the show we walked around the village. 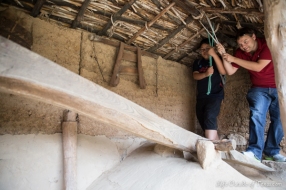 Dave and a kid smashing rice 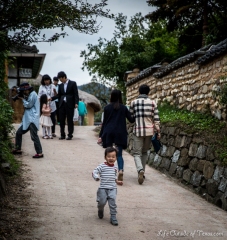 You could rent these… somewhere…

Korean Family walking through the village 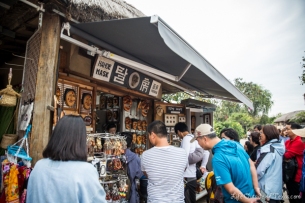 We hadn’t eaten since breakfast so we had to make another really difficult decision: stay for the fireworks show or leave and have dinner. We chose to leave. There are places to buy food in the village, but I really wanted to try jjimdak while we were in Andong. 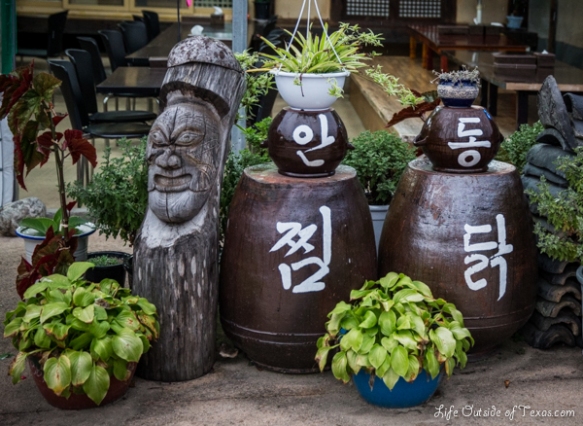 We ended up taking the shuttle back and eating at the restaurant across the street. We had two of Andong’s famous dishes: Andong style jjimdak and Andong style bibimbap. We sat outside and the weather was perfect and the food was delicious!

We heard that accommodation in Andong was difficult to find so we opted to stay in Daegu instead (about halfway between Andong and Ulsan). You could probably find a love motel to stay at, but we prefer to have something booked ahead of time. It’s definitely close enough (to Ulsan) to drive back, but we enjoyed the break.

By car: You can plug Hahoe into your navigation system and it should list the village. From Ulsan, the drive took us about 3 1/2 hours. We paid 2,000 won to park at the Hahoe Folk Village and about 10,000 in tolls each way.
By train: The Mungunghwa trains run to Andong. Check out the Korail site for timetables.
By bus: Bus times to Andong vary by city, but I found a really helpful resource with timetables of buses leaving Andong (click here).

If you’re going to the main festival, it will take about 15 minutes by taxi (from the bus terminal). Ask your driver to take you to Tal-choom-goeng-won (탈춤공원).

To get to the Hahoe Folk Village, you can take bus number 46. The stop is across from Andong Intercity Bus Terminal. Get off at Hahoe Ma-eul (하회마을).

Admission to the main festival is 7,000 per person or 3,000 for the Hahoe Folk Village (prices are lower for children).

You can visit the official website for more information.