We recently went on a major road trip on a mission to visit Nami Island, which is in the far northern part of Korea and very far from Ulsan. The night before leaving we booked the Benikea Hotel (short for Best Night in Korea) in Wonju. Because we waited until the last minute, we had to book a “luxury” room for 10,000 won (about $10) more. When we got up to the rooms, we both had a laugh because the room looked like someone from our grandmothers’ generations could have been the decorator. Most hotels in Korea go for the ultra modern look, but this one had a giant vintage sofa, antique wooden furniture and to top it all off, there was a full desktop computer set up in the room. If I didn’t already know that Korea has the fastest internet in the world, I would have expected to hear the shrill sound of a dial-up modem when trying to connect to the internet. 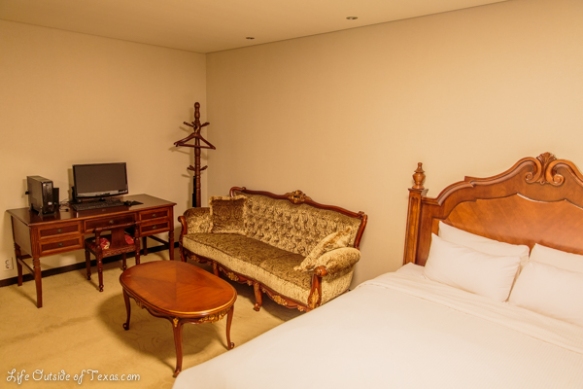 Because it was so fabulous, I couldn’t help taking a picture of the room and posting it to my facebook page. While I was at it, I decided to add a location. I couldn’t contain my excitement when I went to check-in and in the list of possible options was a rail bike that was only a few miles from our hotel! It was destiny. I have been wanting to go rail biking since coming to Korea over three and a half years ago and this was finally my chance. 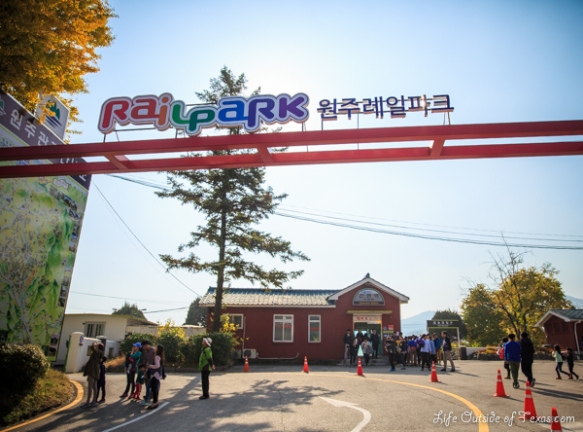 We got to the Wonju Rail Bike park around 10:00am and were surprised to find out that the 11:00 tickets were already sold out so we bought tickets for the 1:00pm train and set off into town to get some lunch.

We got back just as they started boarding the train that would take us to the rail bikes. I was so surprised by how many people were on the train. We were sure they some of them were just along for the ride and would be doing something else once we got to the end of the line, but we were wrong. They had lots of rail bikes and everyone was there for the same reason.

We found a 2-person rail bike and waited for the attendant to give us the go ahead and then took off.

The rules of the rail bike were simple: stay at least 10 meters from the people in front of you, wear your seatbelt, no smoking and no littering.

The entire ride was down a very slight slope so pedaling was easy as pie. Very minimal pedaling was required and Dave did that while I snapped photos. Lots and lots of photos.

The ride was pretty scenic. We passed over the occasional river and were surrounded by mountains that glowed bright yellow, crimson and burnt orange. We even traveled through a few tunnels along the way. The first one was the “Love Tunnel” and another one was the “Scream Tunnel” that actually had a really trippy light show.

From start to finish it takes about an hour and a half, but the rail bike part of the adventure was just about 45 minutes. They run the 6.5km track between Pandae and Ganhyeon Train Stations 6 times per day — once every two ours beginning at 9:00am (though the last train begins at 6:40pm). Additional times are added during the peak summer season.

We thoroughly enjoyed it and would highly recommend it to anyone… friends, couples or families. If you’re thinking about rail biking over the weekend, it’s a good idea to try to call ahead to make a reservation or to get there early and expect a possible wait (or they could potentially be completely booked), especially during peak seasons. 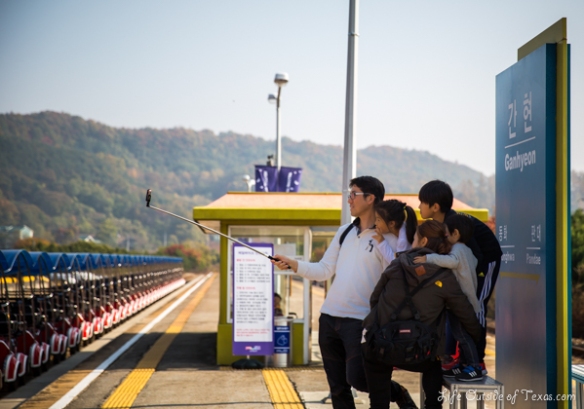