Once I got settled into orientation, it was time for lunch. The food wasn’t bad, but it wasn’t amazing either. The same can be said for all of the meals here in the dorm. After lunch, a large group of us went to walk around and explore the city. Half of the group ended up wanting to go to the bars and half just wanted to explore so we ended up splitting up. We walked around for over two hours and had a lot of fun. We went to a local coffee shop called Angel in us Coffee and took loads of pictures. My roommate is from Chicago and she had a pizza craving the minute she got off the plane so we thought it was really funny when we ran across a pizza delivery scooter on the sidewalk. We also ran across an Outback Steakhouse. 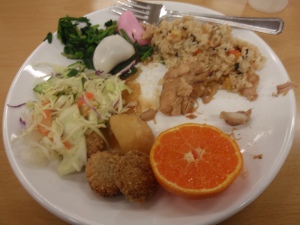 Friday was our first official day of orientation. It was also the day of our medical checks. We had to fast so we couldn’t eat or drink anything after 9pm Thursday. The medical checks were quite an experience. They made us go in by class number so I couldn’t go until 10:20am. I didn’t end up getting done until noon. We were STARVING! The auditorium where they were doing the medical checks was FREEZING! We had to wait over an hour just to begin.

I was a bit worried about the hearing test because about a month ago I ruptured my ear drum and my hearing out of that ear isn’t that great. Fortunately, they administered the easiest hearing test I’ve ever had. They also tested us for color blindness, measured our chests (no one really knows why), took our weight and height, gave us the most difficult eye exam I’ve ever had, took our blood (with no gloves!), and took a urine sample. They also had us do a chest xray, which involved the girls having to take our bras off and then we were all in line to get on this bus where the xray machine was. It was really, really odd.

After our chest xrays we were given orange juice and a small snack, then we all went back to the dorm for lunch. The pictures below are of my lunch… before and after I ate. Needless to say, I wasn’t in love with the cafeteria food.

Afterwards, we all went to dinner. It was very crowded.

The first picture is the plate of food that I got. Unfortunately, I didn’t eat more than a few bites. Everything was cold. I went back and got a new plate and ate all of it.

Saturday was our first day of lectures. They kept us EXTREMELY busy during orientation. We had lectures from 9:00am – 12:20pm, then lunch and then more lectures from 2:00pm – 5:20pm. We would then break for dinner and after dinner we had Korean lessons from 7:00pm – 8:10pm.

A very typical breakfast for me was toast with butter and strawberry jelly. Sometimes I would eat cereal also. The second picture above is lunch. I think on this day I really just ate oranges. Some of us went down to the convenience store on the first floor and got snacks. Here’s Megan and I with our snacks…

Dinner was much better…. 🙂

McDonald’s tastes the same in South Korea, in case you were wondering.

Above are pictures of some of the things we saw on the way back to campus.

After Korean lessons we ventured back out to a foreigner bar called HQ. It was full of people from orientation. We had a great time.

On Sunday we did more of the same… toast for breakfast, lectures, lunch, lectures, dinner, Korean lessons… BUT….

We ventured out for lunch…

We were on a quest for pizza!

We were all VERY excited, but no one was more excited than Megan (aka Chicago). And look how how they wrap up your leftovers… cute!

That is it for Part 1. I will post about the rest of orientation very soon!