Blogging is more work than it seems. Between being sick for so long and being a terrible procrastinator, I’ve managed to get about two months behind on my posts. I decided to go ahead and blog about my birthday weekend and then I’ll go back to playing catch up.

I love going to baseball games so I decided that’s how I wanted to start my birthday weekend. Busan is actually famous for baseball so the games are a lot of fun. Our team is the Lotte Giants. I don’t know what their record is, but they have lost both of the games I have been to. Maybe I’m just bad luck.

I charged my camera battery before the game, but forgot to put the battery back in before I grabbed my camera and left for the game. You can take my word that it was a fun time. We even made a few new friends, but I had to steal pics from friends to prove it.

Afterwards we went to Fuzzy Navel in Seomyeon. We ended up getting there just in time for one of the fire performances.

Afterwards we talked, danced and had a great time.

I ended up sleeping until about noon and then meeting up with my friend, Faith, to explore the city. We went to Nampo-dong and had Pizza Hut. The Pizza Hut is in a great location in PIFF Square, on the second floor so there are lots of opportunities to people watch.

Afterwards, we made our way to Busan Tower. The tower is fairly inexpensive (just 4,000 won) and the views are great.

We took the subway back to Seomyeon after visiting the tower. We hoped to see a movie, but there weren’t any good English movies showing at either of the theaters. Afterwards, we both headed home.

Even though I celebrated all weekend, Sunday was my actual birthday.  I ended up waking up to tons of Facebook messages and a few KakaoTalk messages from people back home. Later on, I got some hilarious voicemails from my best friend which put a huge smile on my face. I wasn’t able to speak directly with anyone back home, which was really disappointing.

I went back to Nampo-dong on Sunday for lunch with some friends. We had Indian food and then headed to the beach. I ended up getting some great gifts and cards from my friends and had a great time. I got two cakes, a gorgeous necklace, a beautiful potted cactus (that is now sitting on my desk at work) and some amazing birthday accessories (sunglasses and a party hat).

At the beach we had soju popsicles and some cocktails. We didn’t stay out too long though because the sun decided to hide and the wind started blowing too hard.

Overall, it was an amazing birthday weekend. I had a great time in Busan with my friends. I am keeping my fingers crossed that 27 will be my year! 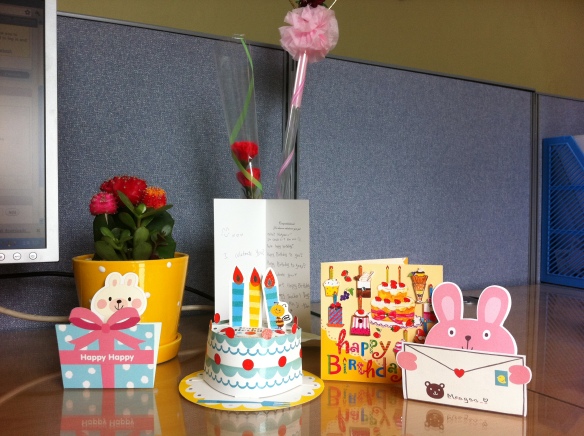