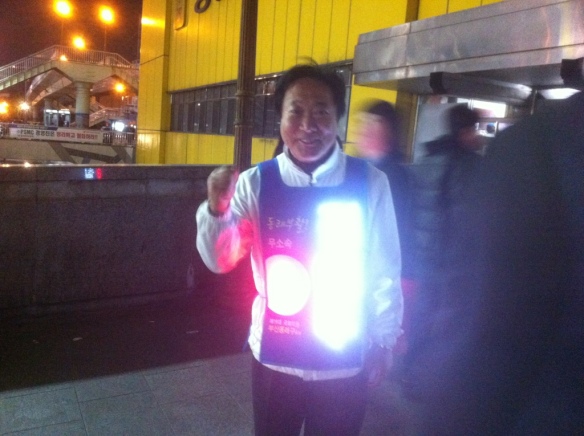 It’s election year in Korea and campaigning is out in full force. Dave and I went to dinner tonight and walked by a bunch of campaign staff trying to sway voters. Each candidate has a number… The staff for #1 were wearing red jackets, the staff for #7 were wearing blue, but #8’s staff were wearing these jazzy numbers. It’s impossible to tell from the photo, but there was a light up 8 on the vest as well as the candidate’s name, all in LED lights.

I had stopped to try to get a photo of them all in action, but it was hard to get a shot that wasn’t blurry because they were all hard at work. This man said hello to me so I asked him if I could take his picture. He was really nice. He posed and said, “Fighting!” That’s a common Korean exclamation that basically means good luck or we can do it. Afterwards we had a brief conversation about where I’m from. He even made a joke about George Bush being my neighbor.