I recently realized that I haven’t been very personal on my blog in some time. I feel like my readers aren’t getting a real sense about what life is like for me in Korea or what I’ve been up to, other than going on so many fabulous adventures. Each week (at least until I run out of interesting tid-bits) I will be sharing something a bit personal with you. If you have any questions for me, PLEASE leave them in the comments. I’d love to answer them.

This week I am going to tell you the story about how I met Dave. 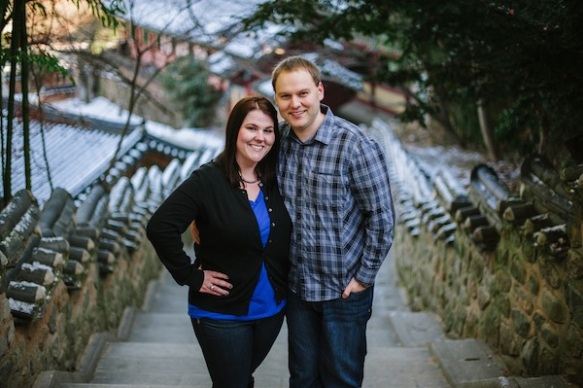 My neighborhood friends had joined an online dating website and I was always hearing about their funny and sometimes creepy stories about guys messaging them. I decided to follow suit and sign up. I wasn’t very active on the site at all. I just responded to a few messages here and there.

The thing I remember most about Dave’s first message to me was how long it was! I honestly thought he was just one of those guys that copy and pasted the same message to a bunch of different girls, but as it turns out, I was the first girl he had ever messaged. I replied pretty instantly, but all I said was, “How are you?” I was actually pretty surprised when I got his reply. It was even longer than his first message! That’s when I realized that he was actually just a talkative guy, and wasn’t trying to chat up a bunch of girls.

We messaged back and forth for about a month until we finally had our first date on November 20, 2011. He drove from Ulsan to pick me up from my apartment in Busan and then we drove to Haeundae Beach. Conversation was good, but it definitely had that first date sense of awkwardness to it. We walked around looking for a restaurant and finally ended up at Outback Steakhouse. I found this quite funny because Dave is from Australia and he’s also a vegetarian.

As Dave drove me home, I kept wondering if he actually liked me. He had already invited me to his New Year’s party and on his upcoming trip to Seoul, but hadn’t really given off much more than a friendship vibe. I was completely confused! In fact, I honestly wasn’t even sure if what we were on was a “date.”

The next morning I woke up to a text message from Dave so I assumed he had a good time. We arranged to meet up again two weeks later, on December 4th.

For our second date he asked me to meet him at the beach instead of picking me up. I understand why, it was an extra 45 minutes to my apartment, but I felt like we were going downhill. During the date, there seemed to still be no chemistry. There were plenty of opportunities for him to hold my hand, but he was completely oblivious! Not even a romantic stroll around the beach warmed him up.

Finally, we started walking back to the subway station for me to go home for the night. I was really disappointed. After over a month and a half of talking now, I felt like nothing was going to come of this. I decided not to give up and asked Dave to sit down with me, just before we got to the subway station. As he says it, it was me asking him to sit down to make something click. That’s when he finally decided that he really liked me.

It was really cold out, but we sat outside for hours. He used it as an excuse to hold my hand and cuddle up. Once we couldn’t stand the cold any more, we moved into the coffee shop that we had been sitting in front of for ages. We ended up staying out way later than we had intended. The subways stopped running at midnight and it was pushing 1:00am. I offered to take a taxi home, but Dave insisted on driving me. I thought that was really sweet since Dave had to work the next morning and still had an hour and a half drive.

When Dave dropped me at my apartment, we had our first kiss.

We grew attached really fast and Dave said he loved me for the first time on New Years Day 2012. It only took me another week to reciprocate.

We continued on with our long distance relationship for about 8 more months. Each weekend Dave would drive to Busan or I would take the train to Ulsan. It was really hard being apart all week so Dave eventually started coming down at least once during the week.

Dave was there for me when I went through my school renewal issues and he was there for me when my school told me they wouldn’t approve my request for a week of unpaid leave to attend my brother’s wedding. I knew I had to go to the wedding, but that also meant I had to quit my job to do it. Dave and I knew how the hour and a half distance was for us, we couldn’t imagine trying to keep up a long distance relationship with a 14 hour time difference and a 12 hour flight. We made the big decision that I would stay with him in Ulsan as much as my 90 day tourist visa will allow.

We’ve been really happy ever since!

31 thoughts on “How I met an Australian guy in Korea…”