I recently ran across a Busan etour website and found my neighborhood and discovered all sorts of things that I never knew existed. On Sunday I decided to set out alone to explore my area.

Dongnae Station is in the middle of the map. I live near Minam Station (left of Dongnae), which is about a 15 minute walk from Dongnae Station. I make this walk all of the time. If you look at the map, you can see that there are all sorts of landmarks in the area behind Dongnae Station so I decided to go exploring and see if I could find any of the things listed on the map.

I was basically wandering aimlessly. I just started walking in what I thought might be the general direction of things and hoped eventually I might run into something on the map. The first thing I came across wasn’t actually on the map.

The cool thing about this place was that it was tucked away in the middle of an outdoor market that I just happened to decide to walk through.

Next, I saw something that looked interesting so I walked up the winding driveway and it happened to lead to a Buddhist temple. The temple was quite busy. I saw many people heading up the stairs and there were women out front greeting people as they entered. They bowed to me when I walked up so I said, “annyeong haseyo” (hello) and they all giggled. They were super cute so I decided to try to ask them directions to one of the places on the map. I showed them the map on my iPhone and they all discussed things amongst themselves before they called over another woman who spoke a bit of English. That woman asked me where I was trying to go and then walked me back down the winding driveway so she could give me better directions. Her directions weren’t extremely clear so I ended up getting a bit lost.

I was trying to find Beokcheondong Gobungun Ancient Tombs. The woman told me that I should walk past these apartments so that’s what I did. If you click on the picture, you can see that the tombs are in the background, but there’s just no way to get to them from where I was. I kept walking up and behind this area, but it came to a dead end. It was so frustrating because I could see the tombs and the museum… I was walking all around them… but I just couldn’t figure out how to get to them. 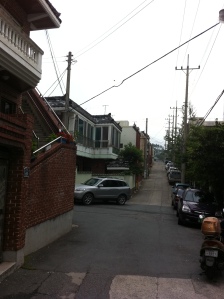 So I went back and decided to keep walking even farther past the apartments on the main street. It worked out for the best because I came across some other nice finds, including a Confucian school and this man, decked out in full hiking gear, that I though truly represented my “Urban Hike” theme. 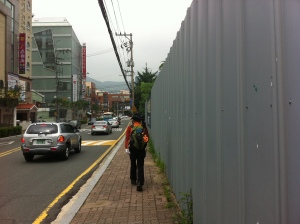 I had been walking for a few hours at this point and I was beginning to get exhausted, but I was determined to find the tombs before heading back home. I followed the road and took the first right at the next major intersection and I just kept walking…

I was so close to quitting, but I didn’t. I pushed through and I’m so glad I did because after the bend in the road, I finally found what it was I was looking for (and more)!

First I walked up the trail…

As I walked a little further, I knew I was in the right place!

After the long journey I had just endured, it felt AMAZING to walk across this bridge because it led straight to the tombs. Success!

Sunday’s hike was so much fun. I can’t wait to get out there and explore some more!

I hope you clicked on some of the pics. I know the pictures don’t really do it justice, but the views were truly amazing.